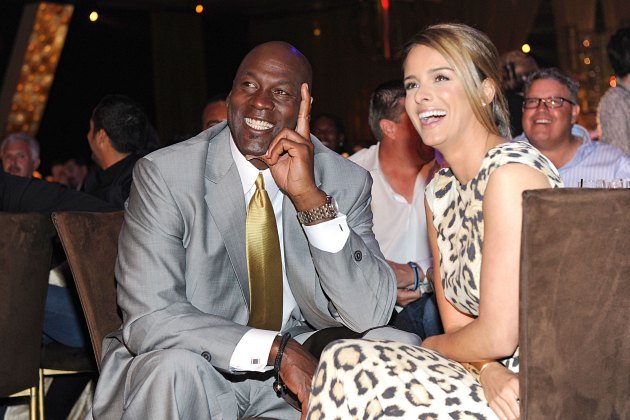 Any discussion of the NBA postseason eventually turns to Michael Jordan, the greatest player in NBA history and a strong point of comparison for today's stars 15 years after he participated in his last playoff game. That was particularly the case on Saturday, when Chicago Bulls guard Nate Robinson came up one point short of Jordan's franchise record for fourth-quarter scoring in the postseason in a wild Game 4 win over the Brooklyn Nets.

However, the day was an important one for Jordan for reasons entirely unrelated to basketball. More than a year after becoming engaged in December 2011, Jordan married fiancee and former model Yvette Prieto, his girlfriend of five years. People.com has details:

After five years of dating, former NBA star Michael Jordan, 50, and his model-fiancée, Yvette Prieto, 35, made it official with a wedding in Palm Beach, Fla., on Saturday.

About 500 people arriving by tour buses piled into an Episcopal church called Bethesda-by-the Sea, where Donald Trump was married to Melania in 2005.

Jordan invited another 1,500 to join them for the reception at the Bears Club, a Jack Nicklaus-designed golf course community in Jupiter, Fla., where Jordan recently built a 38,000-square-foot home.

While 2,000 combined guests does not exactly suggest a modest affair, the full size of this monstrous event cannot be communicated by words. After the jump, check out aerial photos of the wedding tent.

Michael Jordan’s Wedding Tent is 40,000 sq ft, 5000 sq ft larger than his 35,000 sq ft home in the elegant and classy Bears Club in Jupiter, Fl. As you can see from the aerial, Jack Nicklaus has graciously allowed Jordan to place the largest tent in wedding history on the driving range of his renowned golf course in order to house the only 2,200 invited guests! [...]

The sound system for the affair arrived in four semi-trailers and the band spent the entire day Friday rehearsing for the BIG EVENT. Golfers had a great time on the course, with a backdrop of music to play to.

So, to recap, Michael Jordan's wedding reception occurred in a temporary tent larger than his own house, complete with bathrooms big enough to host a separate large wedding and a dance floor with its own lighting effects system. What an intimate affair!

This is Jordan's second marriage. In 2006, he split with Juanita, his wife of 17 years, in what Forbes called the costliest divorce ever. He has two sons and one daughter from that marriage.

There are as yet no details on the content of Saturday's ceremony and/or reception, so we can only speculate if His Airness wore special Air Jordans or how many buttons were on his suit jacket. It's safe to guess that several of Jordan's former teammates were in attendance, although chances are he didn't invite Craig Ehlo.

Also, while it may seem odd for the owner of an NBA franchise to schedule his wedding during the playoffs, please remember that Jordan presides over the Charlotte Bobcats, the second-worst team in the league this season at 21-61. I'm pretty sure both MJ and Prieto knew their schedule would be free.

Posted by Amanda Sherman at 10:58 PM No comments:


Being involved with Empowering Today's Professionals (ETP) has not only help me developed myself as the CEO of Me but also given me the steps of being a great volunteer.   As the ETP Director of Volunteer Services I have been given a wonderful opportunity to be surrounded by great individuals.  The interesting thing about being a part of an excellent organization you are treated with respect, integrity, and dignity.  What I have learned about this organization is no matter where you are if you have a problem, you need assistance all you have to do is pick up the phone, send an email, or raise a little white flag our members are right there to help you any way they can.  This is the type of organization that I am fortunate to be involved with.
Posted by Amanda Sherman at 12:48 PM No comments:

New York, NY April 26, 2013 – Addressing the importance and impact of volunteering, President Barrack Obama stated in a recent proclamation "National Volunteer Week is a time to renew that fundamentally American idea of service and responsibility. It is also a time to recognize the men, women, and children who bring that principle into practice every day by lifting up the people around them.  Volunteering rates are the highest they have been in years. More Americans are answering the call to serve -- not for fanfare or  attention, but because they want to give back. And as they do, they are making our communities stronger. They are boosting  local economies. And they are building ladders of opportunity for those who need them most."

Founded in 2004 by successful speaker and coach, Rod Colon, Empowering Today's Professionals (ETP) has been celebrating all week by recognizing its volunteers.  Rod explains "ETP teaches people how to take control of their careers in the same way a chief executive officer directs all critical operations of a large corporation. Our mission has been to impact students and professionals globally to manage their careers – by owning it. Becoming a Non-Profit Organization gives ETP resources to continue our commitment to empowering today’s and tomorrow’s professionals globally."

Sponsored by Points of Light Institute — National Volunteer Week was established in 1974 and has grown exponentially each subsequent year, with thousands of volunteer projects and special events have been happening throughout this week.

ETP Board of Advisor member, Ruth Harenchar states "I am glad to be involved with ETP being an educational community service non-profit organization that teaches professionals to run their career as the CEO of ME Inc..  As a former ETP board member spearheading the volunteer team that resulted in ETP being certified as a 501c3 tax-exempt charitable organization was an awesome experience. Volunteering for ETP helps train more people in the methodology and concepts of being CEO of Me Inc.  Volunteers reinforce what they’ve already learned as well as learn from others.

As part of this celebration, ETP published a Volunteer Directory on it's web site www.ETPnetwork.org for public recognition. The directory highlights volunteers, while allowing anyone to expand their networking sphere of influence by clicking on each volunteer's LinkedIn profile to make a connection.

Lamplighter Editor-in-Chief Adelaida (Aida) Rodriguez says "Today, I am proud to say that the Lamplighter Newsletter has  helped promote ETP’s tenets on job search to its members and colleagues by the utilization of good networking and various social media."

The book Win The Race for 21st Century Jobs by Rod Colon is the ETP training manual that has inspired thousands to land jobs and close business deals. This book is used as a reference guide for all ETP training programs, which volunteer Faculty members share.

As I learned being around Empowering Today's Professionals' leaders, volunteering with organizations has helped me develop quite a few new clients.  ETP has a an awesome volunteer benefits package that is 2nd to none." states successful entrepreneur and ETP Director of Volunteer Services, Amanda Sherman.

About Empowering Today's Professionals
The mission of ETP Network is to encourage, train, support, mentor and advise fellow CEOs of ME, Incorporated in all aspects of defined responsibilities to their personal Board of Directors. ETP's proven education programs and methodologies guide each member through "HOW" to specifically land a job and develop self empowering career management goals.
Email: Membership[AT]etpnetwork[DOT]org * Tel: 732-367-5580 * Web: www.ETPnetwork.org
http://Facebook.com/ETPnetwork * http://Twitter.com/ETPnetwork * http://YouTube.com/ETPnetwork
Posted by Amanda Sherman at 8:50 PM 1 comment:

Should Dads Take an Active Role in Their Daughter's Marriage Choice?

Should Dads Take an Active Role in Their Daughter's Marriage Choice?
Posted by Amanda Sherman at 9:18 PM No comments:

My Own Destiny – Life as an Entrepreneur

When you first start realizing that what you have been doing is really not your career but a regular JOB, ask yourself, "What do I really want to do with my life?" I have struggled with that question throughout my working years.

In trying to get answer to this question, I have listened to several professionals by attending seminars, reading books, taking courses, and listening to the advice of fami-ly and friends. And yet, I’m still in a dilemma about what I want to do with my career. Well, I finally came to a decision that . . .
(to read the rest of this story - click on the Lamplighter Newsletter).....

Read more »
Posted by Amanda Sherman at 9:00 AM No comments:

13 Cupcake Recipes For College Theme Parties
Posted by Amanda Sherman at 9:00 AM No comments:

Read more »
Posted by Amanda Sherman at 8:00 AM No comments:

Home Hair Coloring Dos and Dont's | All Beauty Tips | Style&Beauty | MyDailymoment.com
Posted by Amanda Sherman at 10:00 AM No comments:

Which Hand Does A Woman Wear Her Wedding Ring On

Which Hand Does A Woman Wear Her Wedding Ring On
Posted by Amanda Sherman at 8:00 AM No comments: